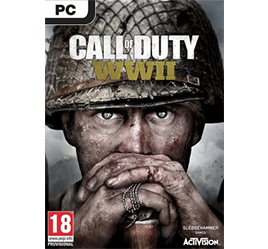 After the travels into the near and far future, Call of Duty returns to its root. Call of Duty: WWII brings the player back to the fields and trenches of World War II. As a freshly minted Private in the Fighting First Division, you’ll witness the horrors of war on the European front after the events of D-Day.

After the travels into the near and far future, Call of Duty returns to its root. Call of Duty: WWII brings the player back to the fields and trenches of World War II. As a freshly minted Private in the Fighting First Division, you’ll witness the horrors of war on the European front after the events of D-Day.

Not in Texas anymore
The protagonist of CoD: WWII singleplayer campaign is a 19 years old kid from Texas, Ronald “Red” Daniels, who decided to serve his country during the war. Starting his military career during the assault on the beaches of Normandy, he will travel with his division across the European theatre.Experience a dramatic storyline showing the horrors of war through the eyes of a young, scared soldier answering the call of duty.Find your own way mediating between the methods and ideas of your mentors Pierson and Turner and survive to see the brighter days.

Back to the roots
CoD:WWII abandons some of the present-day mainstays of the first-person shooter genre. There is no health regenerating after several second of hiding behind a chest-high wall. Even medkits don’t appear magically every so often. Call medic, or stay wounded and vulnerable!You won’t find ammo spawning on every corner. Conserve your ammunition, or ask your allies to lend some to you. Don’t expect to loot your your fallen enemy and find perfect bullets for your rifle.You are not a killing machine. You are just a kid from Texas, and the game highlights the vulnerability in the singleplayer campaign.And forget about difficulty modes. In this game everyone plays on hardcore.

CoD: WWII multiplayer classes
World at War 2 lets you customise a class within the boundaries of five distinct division you can be a part of. Infantry is perfect for mid- and long-distance combat, and able to performs a bayonet charge. Join an Airborne division for fast and stealthy experience, especially with suppressors on your SMGs. For heavy firepower join the Armored division, equipped with mounted machine guns and rocket launchers. If long range combat with sniper rifles are your thing, then the Mountain divisions are for you. Or blast your enemies with incendiary rounds and shotguns are members of an Expeditionary division.

Co-op
When the tides of war turned against the Third Reich, the leaders turned to occult forces. They brought forth hordes of undead soldiers in an effort to change the odds. Call of Duty: WWII (PC) brings back the much acclaimed zombie-based cooperative mode to let you form a squad with friends and push back the onslaught of rotting walking corpses.Experience the horror expertise of developers behind the Dead Space series. Nobody’s better to show the undead during one of the most horrific times for humanity.

Dynamic setpieces
Run through the forest shelled by a distant artillery and watch it shatter before your eyes, raining deadly shrapnel on your squad. Escape a crumbling church tower after covering your squad mates with sniper fire, and get to the ground before the bell destroys every way of escape. These and many more events await you in CoD: WWII.

Key features
Call of Duty: WWII is the first-person shooter bringing the genre back to the roots, taking the gritty, boots-on-the-ground approach. The first World War II-centered FPS in a long while, with all of the modern production values.

Be the first to review “Call of Duty: WWII PC” Cancel reply